END_OF_DOCUMENT_TOKEN_TO_BE_REPLACED


Warning: WP_Syntax::substituteToken(): Argument #1 ($match) must be passed by reference, value given in /homepages/8/d317303823/htdocs/blog/wp-content/plugins/wp-syntax/wp-syntax.php on line 383


Some days ago, I received a mail from a guy working on a game with the Citrus Engine. It shows me the progress of his game… another blast!
Let me introduce CynicMusic’s game, one of the greatest platformer game I’ve ever seen made with Starling and the Citrus Engine! He hopes to finish it around Christmas, best wishes for Alex Smith. Play the game, graphics are pixel art, and the music is awesome! I really love the mood. I also want to highlight his work on the gameplay : water, reward box… managed by Box2D Alchemy. Take a look on the FPS, 60fps, yep guys I’m impressed! 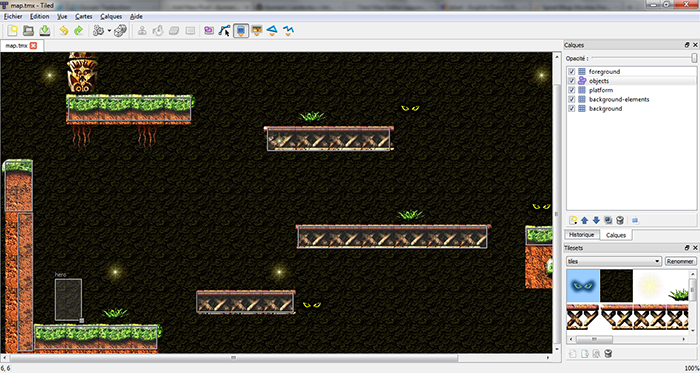 
Warning: WP_Syntax::substituteToken(): Argument #1 ($match) must be passed by reference, value given in /homepages/8/d317303823/htdocs/blog/wp-content/plugins/wp-syntax/wp-syntax.php on line 383


Edit: The Box2D AS3 pure version is quicker than Box2D Alchemy! Take a look there

Hey folks! Today I’m glad to share an important performance test for AIR mobile developers which want to use a physics engine in their games and applications.
The Box2D Alchemy version is used rather than the “simple” Box2D because it has better performance. Test on Allan Bishop’s blog.
I’ve already made a quick performance test comparing Box2D Alchemy & Nape concluding that with Nape you could create 60% more objects than Box2D and have the same FPS!

That was a simple test without different objects behaviors. So now it’s time to test in the small project game : Live4Sales, made with the Citrus Engine using Starling & AIR 3.4. In a previous post there were already project/code explanations and good practice with Box2D. I will not make code comparison with Nape since all the source are available on the CE’s GitHub.

To compile for one or the other engine just change one line in the Main :

And it will works! Most classes are common, just physics one changed. With the CE version on the repository, Nape use the same coordinates system than Box2D. It has never be so easy to switch! I’ve the same physics behaviors for Box2D & Nape in the game apart I didn’t success to cancel easily forces after collision with Nape.


The test is categoric, yep, Nape is blazing fast!! The Citrus Engine made a really good move adding Nape support!

In conlusion, if you want to target Web only? It doesn’t matter, both are very performant on a computer. Since the API are very differents select the one you prefer! You will find more code example with Box2D than Nape, however Nape is easier to handle. Also you have to know that Box2D Alchemy involves Adobe “Tax” if you use Starling too whereas Nape doesn’t (with the Nape’s debug view I’ve chosen). Don’t forget, if you want Adobe keeps its good work on Flash you’ve to support them!
Perhaps your game will be a mobile game? Go Nape, directly!
We are closed to the Citrus Engine V3 BETA3 which will be the last one!

Finally I’ve quickly added Nape to the CitruxEngine (Haxe NME port). It was so easy to add it from the AS3 version. This port is in stand-by at the moment : I still haven’t found an easy way to display a SpriteSheet with NME – HTML5. I’m upset!

END_OF_DOCUMENT_TOKEN_TO_BE_REPLACED

Hey there! On this hot summer day, I’m happy to share a new major beta for the Citrus Engine! There are lots of new features, improvements, bug fixes and a new demo for mobile devices. It is also updated on the last version of each library.

END_OF_DOCUMENT_TOKEN_TO_BE_REPLACED

Hi folks! Since my studies are over and my new portfolio online, I have time to focus on personal projects. Yep, it was time to contribute again to the Citrus Engine. I’ve worked 3 days at full time focusing on its big issue : mobile performances. I’m glad to say that now they are just an old memories!

6 months ago, I’ve made the CE compatible with Stage3D thanks to Starling and added some cool stuff. CitrusEngineV3 BETA 1 has been downloaded 3047 in 6 months, that’s not bad! However it didn’t see lots of Stage3D game, because it was missing the point : people wants to make mobile games.

You will find all the sources at the end.

END_OF_DOCUMENT_TOKEN_TO_BE_REPLACED

Hey folks, happy new year! My previous post go back from 1st december, I’ve been really busy : adding Starling in the CitrusEngine, learning iOS and working on my 2nd year school project. And obviously some great holidays between christmas & the new year.

Today I’m very pleased to share with you the Citrus Engine working on Starling! For those who don’t know it, it’s a platformer game engine using Box2D Alchemy and Signal libraries. However, it’s not only made for platformer games, you can use it for every 2D contents even if it isn’t a game thanks to its great Box2D management. So before this update, it has supported : Box2D physics, Signals event, a Sound Manager, a Console for quick debugging & tools, Input management, lots of defined objects like Hero, Baddy, Platform, Coin, Sensor, Moving Platform…, parallax, a Loader manager, level editors thanks to its own (the Level Architect made with Air), or using Flash Pro, or Gleed2D. 2 views : the flash display list and blitting, and a layer management!

Thanks to this update, the CitrusEngine now support the great stage3d framework Starling and I’ve also added 3 new objects Cannon, Teleporter & Treadmill, a Level Manager and an abstract class to store the game’s data. This two last things are optional you may use it or not. In this blog post I will explain how I’ve adapted the CE for Starling, and my updates with some examples. For a quick getting start with the engine please refer on its website or to the tutorials on this blog.

But let’s stop chatting, it’s time to test the demo :
Click here for the demo.

END_OF_DOCUMENT_TOKEN_TO_BE_REPLACED

Some months ago, I bought two softwares from code ‘n’ web : TexturePacker to create SpriteSheet and PhysicsEditor to create easily box2d object from png file.