Edit: Apptoonomy is no more. Selling games is even harder than making ones. I only focus on Da Viking Code now as a cross platform developer.

Hey guys, this blog post is very special for me :
– it’s my hundredth article!
– my first game as an indie dev is out!

100 blog articles
When I started blogging 4 years (already!) ago, I didn’t imagine that someday I’ll reach the hundredth article. I started mostly as an exercice in style, improving my english communication skills and coding different things for sharing (unpretentious). I continued and now when I give a look in the past I’m smiling : I can see my evolution, how I’m better as a programmer, and all the different things I did in 4 years.
Also thanks to this blog I had my first client as a freelancer! I would recommand to any programmer to have a blog and post each month an article (that’s what I’m doing since 3 years) on what he is doing.

Apptoonomy
With some friends we created a new company, Apptoonomy. So does it mean that I’m not anymore a freelancer at Da Viking Code? No way! What does a programmer on his spare time? He is programming. With Apptoonomy we mainly focus on making our own games. Let me introduce the first one! 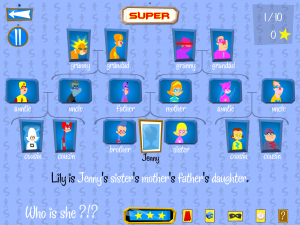 Silly Family is a familly-fun Puzzle Game! Do you know Suzan? Of course you do! Suzan is my father’s son’s sister’s mother’s mother! Suzan is my grandma!!!

In Silly Family, you train your logic by resolving more and more complicated enigmas about increasingly crazier families! You’ll have to find the family relationship or run through the family tree.

We offer 3 different gameplays, 5 families (maybe more) and crazy designs… not to mention the animations! Also a multiplayer mode to defeat your friend!

Obviously questions are generated dynamically, I wrote the algorithm using (family) trees and recursivity. That was funny especially managing the different languages (the application is currently available in English, French, Spanish and Italian). We’re waiting a little bit for German, it won’t be easy 😉

Being an indie dev
Silly Family is the first (finished and published) game that I made as an indie dev. It’s really a longest process than programming games for clients. A client has to be sure (or at least should) that his game design is strong and developer implementation won’t show design flaws. Otherwise programmer’s bill may be painful. I started to develop Silly Family in October 2013 so six months ago. And obviously we already had a game design document. But so many things changed during its developement. Also you can add the fact that you must be satisfied with your game’s direction, and to still have the will to work on. Anyway, it’s a very interesting experience and it improved my skills as a game designer. We’re already looking forward for the next game!

Technology
Obviously I used my beloved Citrus Engine for making this game and Starling framework. The IPA size (before submitting to Apple) is less than 17Mo! How did we achieve this size? It’s thanks to DragonBones and its awesome .dbswf format. AS3/AIR technology was perfect for making this game!

4 thoughts on “Silly Family, being an indie dev”