Recently I had some time to dig more with haXe Php. The major question was how does it integrate with existing native Php ? I’m glad to say that it works fine!
Let’s start a quick overview of our native Php file test (Simple.class.php) :

There are a simple function, some inheritance stuff and an associative array which is very common in Php.

If you are using everyday libraries/tools written in Php, you may wrap them with haXe for more comfort. Take a look there : Wrapping External PHP Libraries & the haXe Magic.

Unfortunately, there isn’t lots of ressources/tutorials for haXe Php on the website, I will update this post if I go deeper in haXe Php development. It is very pleasant to write Php this way. Give it a try!
haXe API.

And because memes are fashion : 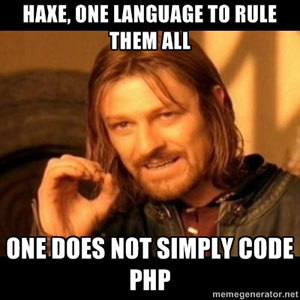 A good IDE is the developer’s best friend. FDT is my favorite one to code AS3 stuff, however I’m not very satisfied with haXe integration… it could be better. A good source code editor is also an amazing tool. I’ve found Sublime Text 2 some months ago, and it sounds always awesome to me. There is an extension which add Package control management to ST2 for adding new plugin, like haXe one.

That’s ok ? Now we can create a simple Php project.
Create a new file, save it as Test.hx and add this code :

Then press ctrl (even if you use a mac) + shift + b. A new file called build.hxml is opened with some code generated to compile. You should just need that :

If you press ctrl + space you have some greats auto-completion features! ctrl + i and the class is imported. If you make some mistake your code is highlighted in pink.

According that you have a field user in your database, it will show the names.

Ok that was pretty cool, what about nme ? Go on this page and download the haXe project. In ST2 go in File/Open Folder… and select the Folder you have just unzipped. It should show the different folders & files in a left panel. Browse the Source and open SimpleBox2DExample.hx and then press ctrl + enter. It is compiled for flash and open quickly the result in the Flash Player. Ok but with NME I would like to target cpp. No problem press ctrl + shift + b then select cpp and compile. This way you can quickly change the target.
He wait, there isn’t html5 target !? I don’t know the reason but it is not offered. But you can add it (thanks to Julien Roche for the tips) : on Mac open the file Users/YourUserName/Library/Application Support/Sublime Text 2/Packages/HaXe/HaxeComplete.py and add html5 to nme_targets on line 124. Restart ST2, press ctrl + shift + b select html5 then compile. You have a new target 😉

Sublime Text 2 and the haXe plugin are awesome, but so far it can not be as powerful as an IDE for debugging. No breakpoint for example, anyway it is already a great tool for a simple code editor!

Recently, JetBrains has released a haXe plugin for IntelliJ. We should keep an eye on it!

Hey everyone!
I’m very pleased to attend to Aymeric’s blog, I hope it will not be the first and last time!

So, today, we will see how to build a simple, but efficient, email form with infinite attachement files in AS3 and PHP.