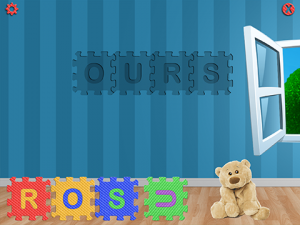 Alef is a free app that teaches young children the letters of the alphabet and the construction of simple words in 5 different languages. The app encourages learning through simple interaction and is adapted for young kids. Children are taught to identify letters by dragging and dropping colorful puzzle pieces together. Parents can select a language including English, German, French, Arabic or Spanish and challenge their kids to construct words using the puzzle pieces! The app also provides word categories, for example animals, which give children visual clues about the meaning of the word they are trying to spell. Parents can customize the words themselves, opening the door to a world of possibilities: names, places, household items, etc. When the word has been put together correctly, a jingle will celebrate the child’s success. Hooray!

The beginning
Alef is similar to Spell Cubes in its first approach. Drag & drop letters at the right place with letter’s sound, like many other games did. When we start working on Alef, we considerate it as an internal project: AJ Consulting is one of the company that I enjoy to work with. They have tons of fresh ideas. They were looking for a Flash framework which would help them to make edutainment project, so I convinced them to use the Citrus Engine and it was a blast! In two days, we already had a working prototype! Then we’ve started to experiment: how to enhance user experience? Children love animals, they enjoy funny sounds too. Both has been added in this first official release. And we have many more awesome features coming! We’ve released the app now for having lots of feedback.

Technologies
We use the Citrus Engine library including Starling, Feathers and Nape.
Why did we use the CE for this app? The obvious answer is for the physics engine support, then comes very useful class to work with Starling: setting a Starling object very quickly and manage its z-sorting easily. And finally for the state transition between each part of the app. The CE makes them easy to clean and create!
We have also added Parse to store data in the cloud. If we want to add new animals, we just need to add it in our Parse database, send a push notification via Parse, people will update the list via the update button and they will get the last animals!
Also I’ve wrote an algorithm for the arabic alphabet which is a bit complex to manage due to the different states of a letter: isolated, initial, medial and final according where the letter is situated in the word. And obviously there are exceptions 😀 Since I’d no knowledge in arabic that was very challenging!
And finally, it was funny to replicate the iOS keyboard behavior managing accents!

CitrusAJ*
As you may have noticed, it’s mentioned the name of CitrusAJ* in the information of the application. It’s a private (at the moment) fork of the Citrus Engine (which has a MIT licence) including stuff which aren’t directly requested in a game engine. It has some helper for Parse, languages, SQL database, etc.
It’s always hard to determine what should or should not be included in the CE.

CitrusAJ* Builder
There isn’t official level editor / app builder for the CE. We use existing tools (Flash Pro, Gleed2D, Tiled Map Editor), it works great but we’re not able to manage them as we would. On the other side, writing a level editor takes lots of time and I don’t have enough time to do it. The CitrusAJ* Builder will be a commercial product developed by AJ Consulting to make an app without writing code. It would be a mix of a game level editor and the storyboard mode in Xcode.

Citrus Engine
No worries, the CE will always be free, open-source and strongly supported. Since we don’t have any kind of financial support, it’s important to take opportunities to work with companies on future product using the engine. This way we make sure it will stay the best AS3 game (and app!) engine!