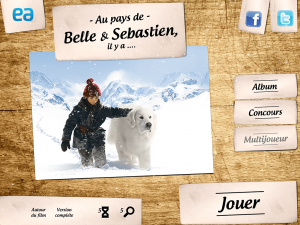 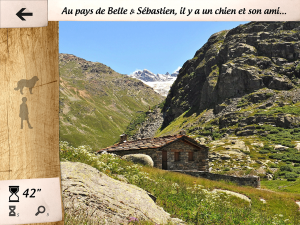 Belle et Sébastien is a famous old french book and there was a TV series. A movie is planned for the end of the year.
In this mobile application, we discover B&S’ world: an album introduce the characters and relates several informations based on elements existing in the movie: Génépi, snow, WWII, wolf, sheeps…
There is also a game, a kind of Where’s Wally?. Through pictures from the movie, you’ve to search hidden characters, animals, objects, etc.

Android’s APK 50mb limit
The development was going great until we had to release the application for Android. The app is 90mb, we wanted to be sure that it could be downloaded via 3G on mobile phone for iOS devices (limited to 100mb). When we uploaded the Android’s APK it fails because of its size: an APK can’t exceed 50mb!
I didn’t know that, what a mess! Quickly, I heard about APK expansion files. Apart form the APK, we’re able to upload two obb files, each file could be up to 2Gb! I can’t understand why Google is limiting APK to 50mb when the final application could be up to 4.05Gb. Anyway, that was the way to go. Note that you can also download yourself a zip and save the its content on disk to be used in your application, but it sounds so much user friendly to have everything downloaded at one time!

The issue finally was: how to use this obb file with AS3/AIR? I discovered this Actionscript Native Extension: Android APK expansion files, and everything worked like a charm!

To generate an obb file (don’t forget to add .obb extension to the file):

Available on iOS and Android, gives Belle et Sébastien a try! Note that translations are coming 😉